When we took stone from collapsing ancient walls close by (pre famine) this cache of metal objects was found within the wall.  It’s as if they were deliberately placed together. Metal was seen as a protective device, to ward off evil, and although these objects are not all sharp & pointy (needles, blades, nails etc) they nonetheless form a group and speak of a certain way of life.

This copper object (lid of a fancy jar or pocket watch?) was found glued with mud mortar to the face of a flat stone within the west gable. 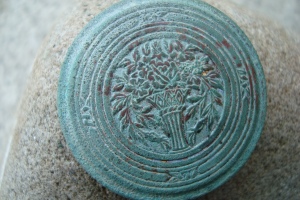 Bottles – often containing traces of urine and hair, spells against evil – were hidden inside walls. Shoes also were a commonly hidden item, perhaps to symbolize tramping upon evil.  A calf’s foot was another traditional item, perhaps for its similar tramping qualities. I have read of bulls & pigs hearts pierced full of pins, found hanging inside old chimneys.

On a utilitarian level, horse shoes and iron bars were incorporated into the walls of byres for tethering of animals. Smashed glass was placed in lower walls to deter rodents from burrowing through.

Yellow Carboniferous sandstone, which is quarried locally in the area of Drumkeelan, brims with fossils of sea creatures that lived 350 million years ago, when South Donegal was awash with warm, shallow water.

It teems with insect life and birds nest within its nooks.

At the close of the day, I stooped to pull an unremarkable looking stone from the mucky foundations of a terribly old cottage.  After a rinse with water I could see it was indeed a grinding stone of some sort. Apparently they were in common use even in the late 18oos.

2 thoughts on “Stone walls have soul”