Transformed by summer our site is a birdsong filled paradise. We take up where we left off in rainy February, to erect the pair of fireplace pillars.

Carefull preparation back in February has paid off, with the pillar positions already marked at half a foot below floor level.

Now they are wedged at the base with smaller stones and mortar, which is how the original structure was except that it was secured into the foundation by mud only. 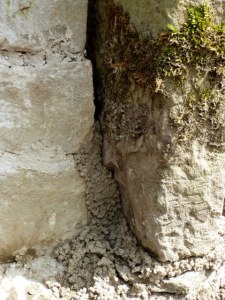 Jambs built to each

side support the  pillars.

Useful in their repositioning are weathering marks, showing where the stones met the floor, and the depth at which they were tied into the wall.

The inner hearth  has a gentle elliptical shape, which the lads expertly build.

After the buttresses have been cleaned of old cement, they are lifted atop the pillars.

2 thoughts on “How to build a stone fireplace (2)”